A Visit from the Language Police: Diamonds vs. Rhombi

I’m always amused when teachers try to correct children’s language, especially when it comes to mathematics. I remember observing a kindergarten teacher working with a child on the names of the pattern block shapes, and the child correctly identifying the orange square and the green triangle without hesitation. When the blue “rhombus” showed up, things took a turn for the worse. The child looked it over and said, “oh, that’s a diamond!” and the teacher said, “no, it’s a rrrr…….” trying to prompt the young man to say the word “rhombus,” which I’m probably going to bet he never heard in his life. The child looked confused and said, “riamond?” The teacher shook her head, and explained, “no, it’s a rhombus. Can you say that?” 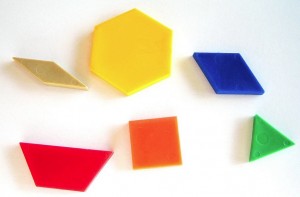 How many rhombi do you see in this picture?

I know that as teachers we like to fulfill our missions by trying to find that “teachable moment” when we can introduce a new word or idea to our students, but as my college art professor, the great Walter Feldman once said, “it’s not what you show, but also what you don’t show that matters.”  In this case, the teacher most likely created a misunderstanding that will stay with the child for many years to come.

The word “rhombus” is a very complicated concept (and yes, nouns can be concepts) and for many years I’ve asked teachers not to introduce this particular term until 4th grade. This may seem like “dumbing down” the curriculum by not introducing a “fancy” word early and often, but in reality, it makes great sense, especially when you consider the development of logical thinking in children.

A rhombus is an example of a shape that has a particular set of characteristics that is not exclusive. A rhombus is a simple closed curve, a polygon, a quadrilateral and a parallelogram. It can be a rectangle and it can be a square. When it is a square, it becomes a type of rectangle, but when it isn’t a square, it remains a “rhombus,” which is not to be confused with a “rhomboid,” which is a parallelogram where the adjacent sides are not equal and where the angles are not right angles.

What we have here is a failure to communicate…

This is where that nasty shape, “the square,” shows up at the intersection of two different ways to classify shapes: it is linked to the rhombus by having all 4 sides equal, but it is also linked to the rectangle by having 4 right angles. This means it lies at the intersection of two different schemes for classifying quadrilaterals: one that restricts it by the angles, and another that restricts it by the length of its sides. ARGHHHHH! 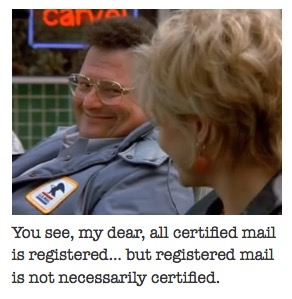 An example of a statement and its converse.

Connecting rhombi to squares creates this statement:  “all squares are rhombi, but not all rhombi are squares.”  And what do we call the rhombus that is not a square? “A rhombus!” ARGHHHHHH!

Suffice it to say, all this is very confusing to adults as well as children (I once spent an hour with a supervisor explaining explaining the statement about rhombi and squares, including why we pluralize “rhombus” to “rhombi” instead of the must easier to remember “rhombuses.”) All of which is to say is this: what’s the hurry with introducing the word “rhombus” to children? Why not let them call it a diamond, which is an actual mathematical term? The reasoning behind what makes a rhombus a rhombus is very complicated and highly specific and completely inappropriate for a young child. Think of how much harder it will be if the only rhombus a child has encountered is the blue pattern block? Sure, you can give a long-winded explanation of how the English geometric vocabulary is very complicated and illogical, but why bother? At this age, shouldn’t children be solving puzzles and moving shapes around, instead of learning complicated and irrelevant vocabulary?