Is This The End of Childhood As We Know It?

I was having lunch with a friend who works in app design (thank gawd his are only intended for adults) when he described an outfit called “Age of Learning” which puts out a very successful app for young children. I shook my head and opined that any parent who used a tablet as a substitute for person-to-person learning experiences with young children should be referred to child protective services.

Realizing that perhaps I was being a little prejudiced, I decided maybe I should at least look at Age of Learning’s flagship product, “ABCMouse” to get an idea what it was all about, and I will wholeheartedly say this: I was wrong. 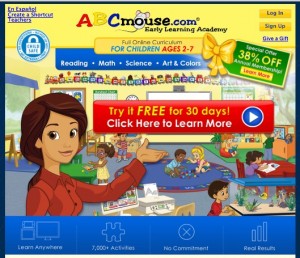 Is this the latest form of child abuse?

My opinion is that any parent that allows their child to spend more than 5 minutes a day on ABCMouse should be locked in a room for a year and spend all their waking hours in front of this program. He should be forced to forget the smell of a magnolia flower when it opens, the texture of new fallen snow, and the feeling of another person’s skin against his own. She should be denied the experience of a spontaneous laughter, the intimacy of looking someone in the eyes, and the warmth of bunny fur. This parent should eat packaged, pre-digested food and be denied any source of natural light.

I don’t know who bought off the American Association of Pediatrics, but I’m in still in the category of people who believe that putting kids in front of screens instead grassy fields or wooden blocks or finger paints is guilty of child abuse. Oh sure, there are parents out there who claim that that their busy lives do not allow them to spend “quality time” with their kids, but it seems to me that putting your kid in front of a screen for more than a few minutes a day is not the answer at all.

In fact, I would say this: if you buy a tablet, keep it for yourself, and give your kid the packaging to play with. I would wager that there are a lot of interesting things that a child could do with a cardboard box and a pair of safety scissors than anything that will take place on the screen.

This blog is the sole musings of one Robert M. Berkman, an educator who has taught math, science and technology for the past 30 years in New York. You can react to all his posts by emailing him at rants@bltm.com.
View all posts by rmberkman →
This entry was posted in educational malpractice, Uncategorized. Bookmark the permalink.