Blabbing About Charters: The Myth of the “Bad” Public School

To me, when the “news” about a charter school is “good,” it usually has to do with a typical scandal about embezzlement or inappropriate “teaching” methodologies. However, when the “real” news outlet, The “Not-Failing” New York Times published an article about a Brooklyn charter replacing its “no excuses” discipline code with a more humane and “loving” environment, well, that passes as “good news” to me. 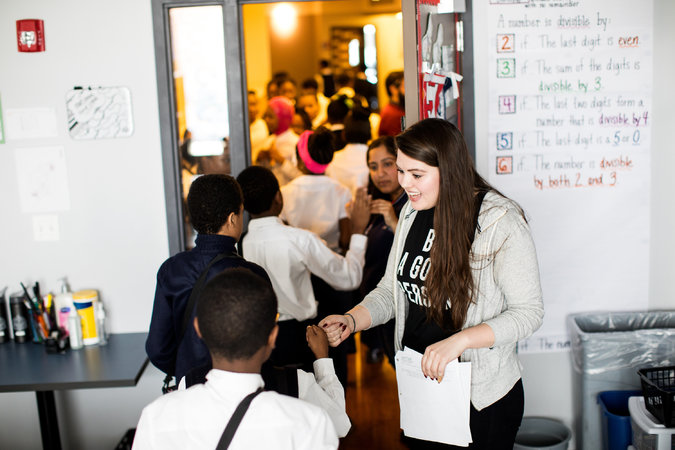 Not that this makes me a fan of charter schools. It did lead to a discussion/argument that took place between me and my girlfriend, whom I love and adore, and sometimes even agree with on occasion. Her position, which is common among those unfamiliar with the charter school issue, is that parents need an alternative to “dangerous” public schools. It is a narrative that charter supporter have promoted, but does it have any basis in reality?

This myth goes as follows: a poor person, usually one of color and desperate to give her  child the “best education” possible has heard through some poorly informed person that the local public school has low test scores and lots of “bad kids.” Wishing to avoid this fate, he/she visits a charter where she sees a very orderly environment where children sit with their hands in their laps, eyes straight ahead, and aren’t those uniforms adorable? I want that!

Indeed, the myth is somewhat true, if only you omit a few certain “facts,” which we know are not valued very highly this day. The most salient “fact” is that many neighborhood public schools are dangerous places with low test scores, so you can’t blame parents for looking for safe and effective teaching environments. On the surface, there is an aura of truthiness about this, but looking below the surface, the myth proves to be what it is: a carefully crated and widely promoted myth. Let’s examine the the facts one by one:

Myth: Public Schools are dangerous places. If you look at the the nation’s largest school district, New York City, there are exactly 4 schools listed as “persistently dangerous.” Less you think these are high schools with high rates of gun violence and assaults, as it turns out that these are elementary schools serving poor children in dangerous neighborhoods. Contrary to the pro-charter narrative, these schools have not been ignored by the Department of Education: in fact, these schools have received extra resources from the D.O.E. to help create a safer environment where students and teachers can work together.

In fact, the only reason charter schools “appear” safer is because they have much less tolerance for disruptive students, suspending them at extremely high rates. Frustrated charter school parents, who become fed up with a child sent home from school repeatedly, end up pulling their kids from the charter and sending their kid to the “dangerous” public school. This allows the charter to go about its business free from dealing with disruptive children, some of whom may have undiagnosed mental illnesses, leaving them to the social workers and teachers who have to treat them at the PS down the block.

Myth: Public Schools Do Not Educate Their Students: I consulted at a public school in the Tremont section of the Bronx for about 6 months. I’m not going to say this school was not without its problems, but the odds were stacked against them from the get go. First, it served primarily an immigrant population, which meant that many students were not fully proficient in English. The second issue is that it was obligated to accept any student who walked in the door at any time, which included a disruptive first grader who was expelled from a local charter almost three-quarters of the way into the school year. The third was that everybody was required to take the mandated standardized tests, which included a class of adorable, intellectually challenged third graders who could barely count reliably to ten, much less solving a two step word problem. Add it together, and you end up with a bunch of fake test scores that don’t give the full picture of how a school performs.

Myth: Charter Schools are Public Schools: This was the biggest bone of contention between me and my otherwise smart and sweet girlfriend and me. She insisted that a charter school is a public school because it receives taxpayer money, as opposed to private schools, which are funded through tuition, donations and endowments. I said this was only partially true: unlike public schools, charters have much more “freedom” to serve only certain kinds of students, as they often don’t offer services for children who have learning disabilities, mental health issues or are English language learners. They are also not obligated to hire certified teachers and they can make demands on teachers, children and parents that are illegal in “real” pubic schools. Finally, they can create their own policies for discipling students, as well as not accepting students after the start of the school year.

If you were to limit the definition of a public school to its source of funding, then yes, charter schools are “public schools.” But if you include features like “open to all students at any time,” and “use certified teachers” and “offers supports for children who are learning disabled, or are not yet proficient in English, or have emotional handicaps,” then charter would fall far short. In fact, when charter supporters chant the slogan “charter schools are public schools,” they are talking about their funding sources only (and even that is not true: many charters get their cash through idle hedge fund managers and rap artists who have nothing better to do than destroy the public school system in which they were educated.) Charter schools are not by any stretch of the imagination public schools.

With the discussion getting heated, my wonderfully warm girlfriend and I declared a truce. She admitted that the issue was very confusing, and I agreed it was. And then we kissed, declared our love for one another, even when having heated discussion, and went out to enjoy the final day of winter.