Do I have to tell you again about how much I h8 “Go Math!”

A couple of third grade teachers and I were discussing how difficult it is to teach fractions well to children, especially those who are former ELL. We discussed how difficult it is to help children understand that the number “3,” which they’ve understood as being pronounced “three” for years and years, is now called “thirds” when it is placed as the denominator in a fraction. Which brought us to discuss this:

How would you pronounce this, I asked. The teachers looked it over, and one of them said, “in Go Math! they wrote that it should be pronounced as “3 over 1.” Immediately my face grew red, and I explained that saying “3 over 1” is not actually the name of any fraction – it merely describes the physical location of two numbers, instead of their relationship as a fraction. I also explained that the fraction would be interpreted as “language” in the brain, rather than as a “number,” if it was read like this.

Posthaste, the teacher searched through the teachers’ manual, found the reference and called out, “oh, it’s worse than I thought. Look at this!” and she pointed to this: 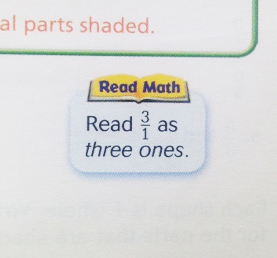 This is absolutely, positively the last straw (and I’ve been loaded with many straws while working with Go Math!) Where in the world did this writer/editor/art director get the idea that this would be read in such a way, and what were the three lead authors with all their PhDs and other “qualifications” doing when this was slipped in.

How was this curriculum endorsed by the NY Department of Education, anyway?