I’ve held a long running skepticism of Annie Murphy Paul, most likely because she has made a career writing about something she knows nothing about. I don’t know what qualifies her to pen a book and blog called “Brilliant: The Science of Smart,” when, in fact, she is neither “brilliant” or a “scientist.” In fact, for someone who spends a whole lot of time reading and regurgitating hard-core research reports from obscure journals, it seems as if Ms. Murphy Paul wouldn’t know the difference between a t-test from a cup of darjeeling.

I know I haven’t ranted about Murphy Paul in a while since I outed her for misrepresenting data when comparing American and Chinese students on basic mathematical skills. When I challenged Murphy Paul on the inaccuracies in her story, I was rewarded by being blocked on her Twitter feed. Oh, and a neighbor reported that someone who looked like her apparently rang my door bell and ran away. 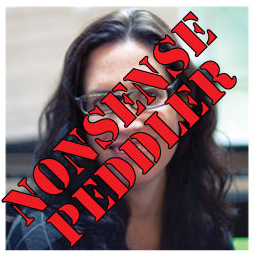 In the interest of keeping my blood pressure at bay, I have studiously avoided Murphy Paul’s junk writing because, well, I have better things to do. However, when someone who I trust and respect like Steven Strogatz goes and re-tweets a link to one of her articles, I knew it was time to spring into action.

Murphy Paul blogs for the “Motherlode” blog at the New York Times and I certainly hope that there aren’t any parents who are taking her reporting seriously. Her latest howler, Research on Children and Math: Underestimated and Unchallenged, is an excellent example of her lazy and stupid style of reporting. First, she begins by reporting that according to the latest Program for International Student Assessment (PISA) scores, the United States ranks 26 out of 34 countries in mathematics. Okay, let’s get the numbers straight: yes, the U.S. is low on the list, but there are 65 nations and territories that took the test, so we’re 26 out of 65, not 26 out of 34.

PISA has long been criticized since the results were released in 2009; in fact, the PISA Wikipedia page devotes five paragraphs to discussing the sampling error that skewed the PISA scores for the US downward. It’s not a good sign of what is to come when you call Americans a nation of “dullards” in your first paragraph based on a well-discredited international examination.

Murphy Paul proceeds to describe some research from the American Educational Research Journal by Amy Claessens of the University of Chicago. I’m sure Murphy Paul read many of the words on that highly complex piece of research, but the part she seems to have skipped was the part showing that poverty was the strongest indicator of mathematical achievement in kindergarten children. Furthermore, the entire question of administering tests to kindergarten children is highly suspect to begin with: studies have shown that young children are incredibly variable when it comes to assessing their understanding of anything, which is why 79% of the pre-kindergarten children who are assessed as “gifted and talented” in NYC would no longer have this tag attached to them when they graduate from high school 12 years later.

I could go on, but why bother? In my mind, Murphy Paul’s business is not really to educate and enlighten, but to sell…. Annie Murphy Paul! You wake up in the morning, pick up a science journal, select an article with an interesting title, write a summary of the “conclusion” section (because the “brilliant” Murphy Paul doesn’t really understand statistics), and then write a good lead decrying how stupid people are, and presto, you’ve got your blog post done for the day. At the end of the year you compile the articles into a book, set up a tour to convince people to buy a copy, and then do it again. Like the “Hokey Pokey,” that’s what it’s all about!