Everybody loves a story about children and their difficulty with numbers, but who knew it could filter all the way up to the higher echelons of commerce? I’m pointing my finger at you, Amazon! Sure, you can deliver anything the next day, but would it kill you to remind your workers that there is a big difference between something that measures 29″ long and the same item measuring 40″ long? If my calculations are correct, that would be 11″ (which is 11/12 of a foot, if you prefer to see numbers as fractions.)

I recently moved into a new apartment which is on the small size, so paying attention to scale is very important to keeping the place appearing cramped. Hence, a 29″ “soundbar” would fit nicely under my television, while also handling the input from a turntable on the shelf below. I ordered from Amazon and waited for it to be delivered a few days later.

Arriving home today I see a package that most certainly is not 29″, 32″, or even 36″ long: it is looooong. In fact, I knew immediately something was wrong, because Amazon is usually pretty good about packing things in the most efficient way possible: I remember the old days when I would get a huge box holding a tiny item like a paring knife, which made me pretty darned irritated, especially when I had to collapse the box and store it until it could be taken away.

Online shopping companies have gotten much better at this, and since I’ve been ordering a lot of things to equip my apartment, I’ve been impressed by the efficiency of packaging, all of which makes sense: the less room an item takes up, the more items can be put on a truck or plane for shipping (even though shipping prices are measured by weight rather than volume. Wouldn’t it be better to use a combination of the two?)

So I was surprised when I lugged this box inside and laid it atop the tv table. Just so you know, the table is 38″ long: 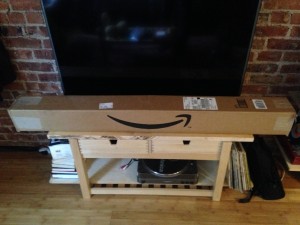 Hmmm, this does not look promising: the box measured 48″ long, and why would Amazon pack a 29″ item (okay, maybe 32″ with packaging) in a box that is over a foot longer?

Unpacking the box, my suspicions were confirmed: this was not a 29″ long unit, but the 40″ model. Now, I appreciate that Amazon was giving me 38% more soundbar for my money, but it was going to look pretty awkward sticking out both ends of the table. 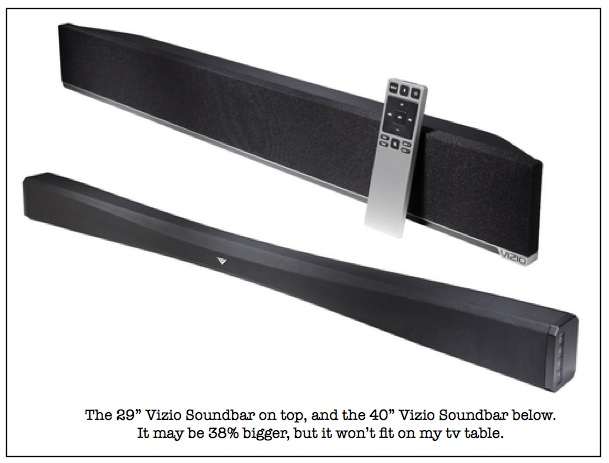 On the dimension of all issues in anybody’s life, this is definitely a “first world problem,” but it seems to me that Amazon has a reputation for being a pretty buttoned-up operation. In fact, I managed to return the item and order a replacement in far less time than it took me to write this post. But really, aren’t the people at the warehouse given enough information to see that something pulled off the shelf is 11″ longer than the one described on the order form?

The next time someone decries the lack of numeracy amount our children, please remember this story and announce to them that at least your students easily recognize that 29″ and 40″ are not the same measurement. Apparently, this is not well known over at Amazon.

This blog is the sole musings of one Robert M. Berkman, an educator who has taught math, science and technology for the past 30 years in New York. You can react to all his posts by emailing him at rants@bltm.com.
View all posts by rmberkman →
This entry was posted in Uncategorized and tagged Amazon, Corporate Innumeracy, Soundbar. Bookmark the permalink.