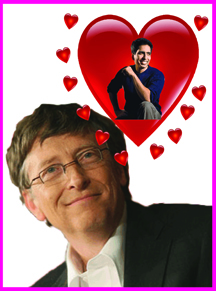 If you’ve been reading all the hoopla and criticisms of Khan Academy, you’ll know that Bill Gates referred to Khan as “the best teacher he’s ever seen.” This quote can be interpreted a couple of ways. Perhaps, it is a “dis” on the teaching he experienced at the prestigious Lakeside School in Seattle as a teenager. At the same time, we should remember that Gates did drop out of Harvard during his sophomore year, so perhaps he was not working with a very large sample size. In my view, Gates’ admiration for Khan can be understood by understanding their similarities.

In summary, it’s not hard to see why Bill Gates and Sal Khan are a match made in heaven; with Microsoft quietly slipping into irrelevance after 25 years, people who have actual concerns about the state of education in the United States can only hope that the Khan Academy fad will have a much shorter half-life. Of course, it will then be time for yet another educational fad.