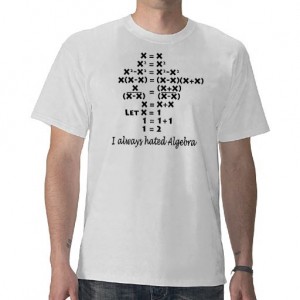 Why does it take a former political science professor to tell us what is patently obvious in the field of mathematics education? Andrew Hacker, a professor emeritus at Queens College and co-author of the “Higher Education? How Colleges Are Wasting Our Money and Failing Our Kids — and What We Can Do About It,” tells us in a front page article in the Sunday New York Times that we should jettison our current high school math sequence in its entirety. In an article entitled “Is Algebra Necessary?” Hacker argues that forcing all students to march lockstep through the algebra – geometry – trigonometry tunnel is a waste of time and results in many students leaving school dispirited and disinterested. To me this is not a terribly daring position, and anybody who would disagree with Hacker’s proposition probably belongs to the faction that believes that “tradition” consists of subjecting our children to the same mind-numbing educational system that we and our elders suffered through because “it was good enough for us, so it must be good enough for them.” Judging from the negative responses, you might have thought that Hacker was demanding the downfall of the Occident, for the consensus seemed to be that we should fix things by getting better teachers (or better students, as I often quip.) I myself have taught algebra for many years, and even though I attempted to make a go of it, I can only agree with his assessment.

To begin at the beginning, let’s answer Hacker’s question, “Is Algebra Necessary?” with another question: “Is Cubism necessary? Are Shakespearean sonnets necessary? Is avant garde jazz necessary?” No, Virginia, none of these are necessary, and when it comes right down to it, neither is algebra. But that doesn’t mean any of them are irrelevant or unimportant.

But before I begin arguing the point, I think it is necessary to distinguish between “algebra” the noun, and “algebra” the verb. Algebra the noun consists of the symbols written down in textbooks, is riddled with lots of Xs and Ys (I once considered applying for the right to copyright the use of X and Y in algebra texts, in the hope I would get rich by receiving 1/100th cent for every time either one appeared), and involves lots of “rules” that came down from some central authority, the most egregious of which is “FOIL.” This is the “algebra” that Hacker describes and that the majority of us who have attempted to learn and teach now decry.

If we understand “algebra” as a verb, then it could be very useful to most people. Algebra the verb, which I’ll refer to heretofore as “algebraic thinking,” represents a non-inconsequential step in human understanding. For what is algebraic thinking but the transition away from “case based” arithmetic, and into a generalized form which can be applied to any instance? Algebraic reasoning allows us to do such things as identify patterns and relationships (which can be compressed using symbols, but I’ll leave that to the textbook writers) that can be applied to a variety of situations.

For example, arithmetic tells me if I purchase 5 pounds of bananas for 60¢ per pound, I know the total price will come out to be $3.00. Algebraic thinking, on the other hand, tells me that if I multiply the number of items by the price per item, I will always get the total price, regardless of whether the items are bananas, magic beans or credit default swaps. The power of algebraic thinking is that I don’t have to go through the trouble of developing a new method each time I want to solve a certain type of problem: much like the venerable Swiss Army Knife, one tool, better known as an algebraic equation, can handle it all.

Algebraic thinking also gives me access to tools that can help understand the past, present and/or future through the use of patterns that can be recorded and generalized. For example, if I found myself afloat in a leaky rowboat and noticed that the water was rising at the rate of 2” every hour, it is safe to assume that after 8 hours, my boat will have taken on 16” of water, which could be especially disturbing if the boat is, in fact, only 12” deep. Algebraic thinking gives me the power to work out a variety of scenarios: if my boat has already taken on 10” of water, I might want to consider bailing very quickly, while if it was only at the 3” level, I would have a bit of time to play a few hands of solitaire before taking action.

Finally, having access to algebraic thinking puts me in better control of my life and can directly influence how I make daily decisions. As I write this, I am sitting on line with 300 other people to see “Shakespeare in the Park,” an annual ritual which involves queuing up at 8 am to wait until tickets are distributed some 5 hours later. By my last count, there are 300 people in line ahead of me, some, but not all of who will get 2 tickets apiece. The theatre holds about 1800 people and I just learned that 500 of those tickets are going to be distributed to residents of Brooklyn. Using algebraic thinking, I can put together a reasonable prediction that staying on line for the next 2 hours would be a reasonable course of action. (As it happened, I did end up getting a voucher which would entitle me to get two tickets shortly before the show begins; what time I should arrive to do this is yet another algebraic problem.)

So what are we to make of Hacker and his call to eliminate algebra the noun from the high school curriculum? Of course, some of Hacker’s assertions are debatable; when he cites that “most of the educators I’ve talked with cite algebra as the major academic reason” for students dropping out of high school, he is clearly confounding personal anecdote with actual data. On the other hand, as one of those teachers who has himself observed students suffer through factoring polynomials without an actual explanation of why this may be relevant to anything they might pursue later in life, I’ve come up with bupkis over and over again. To this I would wish a fond farewell to algebra the noun: nobody is likely to miss you.

One Response to What, No Algebra?