As many of my loyal (and not so loyal) readers know, among the things I’m attempting this year is to help a K – 3 public school in an impoverished area of the Bronx implement an alleged “CCSS aligned” curriculum. I’m not a fan of most math curricula I’ve seen, and even the best require some kind of adaptation to be effective with the classroom population Go Math!, however, is among the worst of the worst I’ve encountered, and in my short tenure attempting to adapt it, I find myself mostly doing to the work of informing teachers what not to do, which includes correcting mistakes in terminology and developmental appropriateness.

In this post, I’m going to be discussing assessment: much of Go Math! relies on “end of chapter” exams that focus on multiple choice questions that are either poorly worded or completely inappropriate. One of the criticisms leveled at Go Math! has been its almost pathologic focus on procedures, without giving adequate coverage of concept development and higher order thinking (despite the fact that the graphic designers sprinkled the workbooks with “HOT Problem” logos that are not very “high” or require much in the way of “thinking.”)

The latest howler came in the 3rd grade chapter on area and perimeter. Most of the multiple choice questions don’t actually require any kind of thinking beyond remembering to count boxes when the word “area” appears in the question, or counting line segments when “perimeter” appears, which includes this task: 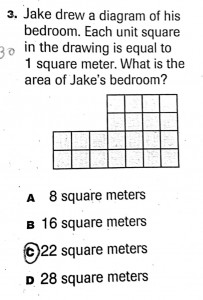 Can you figure out why this is a cruddy question?

Okay, it’s not bad enough that most of the test asks exactly the same type of question over and over again, but if you really wanted to assess whether a student knows the difference between finding the area of a shape and perimeter, wouldn’t it be a good idea to provide shapes where the area and perimeter are not the same?

My suspicion began when out of the 40 tests I looked at, each and every student got the question correct. Okay, it’s not a very difficult question to begin with, but when I looked at the work provided, I noticed that half the students had numbered the squares inside, and the other half numbered the line segments around the outside and came up with 22! Perhaps I’m a little misinformed here, but what exactly is this question assessing? (Let’s set aside the fact that Jake’s bedroom is 22 square meters, or 237 square feet, which makes it larger than the Superior Queen Room at the SoHo Grand in NYC.)

This is not to say that multiple choice tests are all evil; however, if you’re going to go through the trouble of wasting a child’s time with these type of assessments, at least make them interesting and meaningful. This is a garbage question that does nothing to help a teacher assess a student’s understanding of perimeter and area, and whatever 20-something year old editor who allowed this to appear should be fired, or confirmed as a replacement for Arne Duncan.

This blog is the sole musings of one Robert M. Berkman, an educator who has taught math, science and technology for the past 30 years in New York. You can react to all his posts by emailing him at rants@bltm.com.
View all posts by rmberkman →
This entry was posted in bad assessment, Go Math!. Bookmark the permalink.