Barbie was right: Math is hard!

Posted on September 5, 2012 by rmberkman 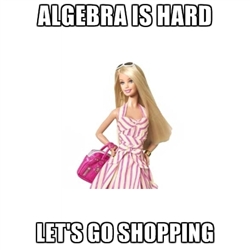 As my loyal readers have probably caught on to by now, I am a die-hard skeptic of any curriculum that seeks to make math “fun and easy.” Actually, I have no problem with the fun part (although it is debatable what constitutes “fun” in mathematics, especially to a 13 year old), but anyone whose intention is to make math “easy” is beneath my contempt. By its very nature, mathematics is difficult and  frustrating, and anybody, ANYBODY who attempts to convince me otherwise is probably not actually doing or teaching mathematics.

Ambiguity and Inconsistency: Those who are ignorant of mathematics claim that mathematics is inherently consistent and rule driven. These are the same people who claim to have an inability to fathom mathematics because they consider themselves “creative,” “people oriented” and “rule breakers.”  Mathematics is, however, by its very nature ambiguous, and it has a long history of creative minds that piled on idea after idea to construct this towering edifice of inconsistency and seemingly improbable ideas (really, there is a square root of -12? Are you kidding me?)  These ambiguities and inconsistencies surface over and over again in the field of mathematics, and anybody who isn’t willing to admit to and confront them is doomed to failure.

Lack of Precision: Yes, there is only a single correct answer to the problem 8 x 7 (according to a story by Robert Kaplan, it is not 53 or 57.) However, 8 x 7 is not mathematics, but its important  and superficial sibling known as “arithmetic.” A real mathematics problem asks us to consider whether there are more points between 0 and 1 or -? and +? on the number line (they’re actually the same, but that’s another matter.) Furthermore, much of the actual mathematics we use is probabilistic, whether it is involves predicting the value of my IRA when I retire to determining what the number of number of hours I’ll need to master the bassoon part on Ravel’s Bolero. Mathematics is not infuriating because it is so precise; rather, it offers up precision where none is available, and even when invoked, its precision can be startlingly imprecise.

Unclear and Inconsistent Methodology: Yes, there are standard algorithms for computing everything from the quotient of two multi-digit numbers (better known as “long division”) to calculating the sum of an infinite series. But this does not fall into the purview of actual mathematics; it is merely an advanced form of arithmetic. True mathematics involves interpreting or inventing procedures that apply not only to particular cases, but also varying those procedures so that they can be streamlined or made “elegant.” There is no “correct” way to perform “long division;” however, there are some ways that are more efficient, transparent and elegant.

Many years ago there was an outcry over a talking Barbie doll which, among her repertoire of mindless statements, rendered an opinion that “Algebra is hard!” Lost in the outcry over of a polystyrene doll uttering such a remark was the actual veracity of her statement. Algebra is hard, and so is much of real mathematics. Let’s just admit it and move on. Let’s remember, however, that just because something is hard, doesn’t mean it isn’t worth doing.