Me vs. the GREs – High Security and Writing My Time

Part IV: In Which I Experience a Freak-Out

Before entering the “testing room,” I had to perform the equivalent of a soft-core video striptease: I stood in front of a video camera while the “associate” called on me to pull out my front pockets, as well as poke two fingers into the little “pocket within a pocket” in my denims. I was then asked to turn around and place my palms into my back pockets; I then had to pull up the cuffs on my jeans and, as if this were not enough, I had a metal-detecting wand waved between my arms and legs. As I finished my performance, I wondered what kind of perv was buying up copies of these files off the “Deep Web.”

“Is that a calculator, or are you just happy to see me?”

Finally cleared, I was escorted into the “testing room,” where I was placed in front of a computer setup that looked like it had been built in Michael Dell’s basement: an old-style black CPU tower rested next to a small LCD monitor, supplemented by a flimsy keyboard and mouse.  Because I stand a steady 6 feet tall soaking wet, I had to hunch down to get a good view of the monitor: neither the chair or the desk or the monitor was adjustable, so it was up to me to crane my neck down and forward to see properly. 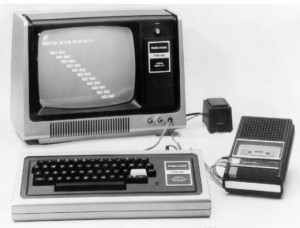 The “ProMetric” Testing Computer setup, circa 2014….

After properly identifying myself, and clicking on a few questions about my background (helllllloooooo, doesn’t anybody at Prometric know about stereotype threat?), I proceeded to the first section of the exam, which involved writing two “analytic” essays: in the first, I would be asked to “analyze an issue,” while in the second, I would be asked the “analyze an argument.” I had looked a the sample questions on the GRE website, as well as the scored answers, and I felt fully confident that I could knock both of these out of the ballpark: after all, I love to write and I love to argue, so what’s not to love about being tested on my ability to argue by writing?

The “analyze an issue” question seemed to be straight out of a pseudo-intellectualized beauty pageant. I am sworn to secrecy about the exact wording of the question, but it wasn’t awfully different from the samples provided, which included “A nation should require all of its students to study the same national curriculum until they enter college,” and “as people rely more and more on technology to solve problems, the ability of humans to think for themselves will surely deteriorate.” My only issue was coming up with good examples: for my particular essay, I would need four of them, and with the vast amounts of random knowledge found on my personal hard drive, it was going to be tough to pick and choose just what those four examples would be. I jotted a few notes on the cover of my workbook, and set about to impress my judges.

Are you f•cking kidding me?

Unfortunately, my ability to compose this impressive masterwork was seriously impeded by the hardware provided,  which was not a lot different from knitting a scarf using a set of curtain rods. It took some time to master the bulky old-school “dented cube” keyboard provided, which would not stay still as I banged out my composition. The contraption rested at an uncomfortable angle, hampering both my typing speed and accuracy. Desperate for leverage, I pulled the keyboard closer to the front of the desk, which meant I had to push my seat backwards. That, in turn, brought me further away from the monitor; to get a better view, I grasped the monitor with both hands and pulled it towards me.  Big mistake: to my chagrin, the screen with my essay-in-progress suddenly blacked out. I groaned and turned to find a proctor, waving my hand in the air, which was useless, as the associates were busy making more videos of the other hapless subjects.

To me relief, the screen flickered to life after a few seconds and I continued on my first essay. As I said, for security reasons I can’t actually state the topic of the question, but I will say this: my examples included John Dryden, Louis Armstrong, Dodo Marmarosa and Gregor Mendel. Full disclosure: the only reason I know anything about John Dryden is because I read a paragraph about him on one of the GRE sample tests. I guess it does pay to practice!

With my issue analysis out of the way (I actually changed one last word in the final 10 seconds, according to the helpful countdown clock which appears on the top right corner of the screen), I was permitted a 2 minute break to rub my eyes, crack my knuckles and meditate on the fact that I still had 3 more hours of this nonsense to go.

Pass the amphetamines, would you please?

Now that my writing chops were into full swing, I nestled down with my keyboard and screen to tackle the second essay, where I was asked to “analyze an argument.” Again, the helpful people at ETS provided me with a few topics to preview before the exam. Here’s one of them, verbatim:

In surveys Mason City residents rank water sports (swimming, boating and fishing) among their favorite recreational activities. The Mason River flowing through the city is rarely used for these pursuits, however, and the city park department devotes little of its budget to maintaining riverside recreational facilities. For years there have been complaints from residents about the quality of the river’s water and the river’s smell. In response, the state has recently announced plans to clean up Mason River. Use of the river for water sports is therefore sure to increase. The city government should for that reason devote more money in this year’s budget to riverside recreational facilities.

It was as if my last 40 years of writing had prepared me for this very moment: since the time I was able to lick a postage stamp, I had never shied away from making my views known to the public. My missives usually appeared in our hometown paper, The New York Times, on topics ranging from the promiscuity of Donald Trump to a half-serious proposal to set up a student stock exchange (that actually appeared on the editorial page alongside Edward Teller and Anna Quinlan.) Whatever the plans were for Mason City, I was ready to have my say.

I surveyed my essay topic, and wielding my analytic cutlass, hacked away at every statement made in the proposal, whether it was questioning the sample size of a statistic to decrying the political and economic philosophy of the author. I delighted in the derision I felt for anybody who would be remotely convinced that the proposition could in any way be valid, and by the end of my 30 minutes, I was basking in my own smart-aleckness, even affixing a nickname to the hapless residents of the burg where this essay took place (hint: remember the Scottish band from the 70’s called the “____  _____ Rollers?”

For me, the writing portion of the GREs bore a lot of similarities to the swimsuit competition: everybody else probably had the same endowment, but I just knew how to flaunt it.

Next: in which panic truly sets in….

4 Responses to Me vs. the GREs – High Security and Writing My Time