Me vs. The Stinkin’ GREs: In Which I Experience A “Freak-Out”

After a 20 minute break, I appeared at the administrator’s desk, showed my identification and signed my name into the log book. I sat down at the computer, knowing that this was the homestretch, and barring some kind of disaster, it might be the last time I would have to take one of these evaluations.

I counted down the seconds, and was directed to yet another section that would assess my verbal skills. The first passage appeared, and I immediately grew concerned: this did not look anything like the essays I saw in the first part of the exam. In fact, this was far denser and even more obscure than anything I had ever read (and you should know that I find the novels of Thomas Pynchon quite enjoyable.) For a moment I thought the computer program had developed a glitch and was now going through the licensing requirements to become a notary in Iceland, such was the foreign nature of this text. I gritted my teeth, calmed myself down and after 3 or 4 readings, I was able to fathom quite a bit of what the passage was actually saying. As I moved through what I believed to be the final verbal tasks, I grew confident, especially because the timer seemed to be clicking off at a slower pace. I finished with so much time left that I returned to some of the previous questions (I had noted their number on the blank booklet besides me) and made some touch-ups. 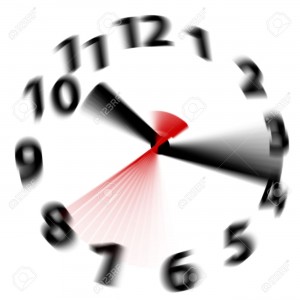 Research reveals that relativity applies to both gravitational fields AND standardized testing!

Shaking out my hands and rubbing my eyes during the next 2 minute break, I was caught unaware that the computer was actually keeping track of my work, and adjusting the level of  difficulty as I moved from section to section. Such was my shock when I entered the final quantitative section and encountered some very, very difficult math problems. The problem was not that the questions were complicated; they seemed almost routine and uninteresting. The issue was that arriving at a solution in just under the allotted minute or so was daunting. I plunged into the exam, taking what I thought was about a minute to solve each problem, and soldiered on.

To my dismay, my pace was not nearly fast enough: I became so engaged in one problem that I stuck with it for 5 minutes, fully ignoring the implications of how this would affect my ability to complete the next 20. With 10 minutes to go in a 35 minute exam, I still had not finished half of the exam. Panic set in.

WHAT DO YOU MEAN I HAVE 3 MORE MINUTES TO ANSWER 10 MORE QUESTIONS!!!

I started by clicking through the rest of the questions: I chose which ones I knew I could answer almost immediately, and skipped those which looked to be too intensive. Some were quite familiar and I knew I could have solved them had I seen them sooner, but this was not a luxury afforded to me. I had screwed up the timing, and now I had to get some traction. At one point I grew so frustrated that I actually slammed my palms on the keyboard and shut my eyes. In a moment of clarity, I realized what was happening: I was experiencing “math anxiety,” and as a self-taught expert on this subject, shouldn’t I know what to do?

I thought fast: CALM DOWN ran through my head. I looked up at the countdown, which showed I had less than 8 minutes to assess and answer a dozen more problems. I clicked through, doing as many as I could in the shortest amount of time, and as the test ended, I knew that I had messed up royally. I shuddered, but consoled myself in the knowledge that at least I was “done.”

But I was not done! Because they were not through with me yet. In complete disbelief, I watched as the screen informed me that I had another 2 minute break before the final section of the exam. ARE YOU F•CKING KIDDING ME! I’VE WRITTEN TWO ESSAYS AND ANSWERED DOZENS OF INANE AND STUPID QUESTIONS! HOW MUCH MORE COULD YOU POSSIBLY WANT TO KNOW?

What the old, white guy really thinks of taking the GREs the newfangled way….

Oh, how tempted I was to stop it right there and walk out. Yet I knew that if I could just hold on for the next half hour, it would all be over. I flexed my shoulders, rubbed my eyes for the last time, and labored on. I read more tedious passages, completed more mad-lib like sentences, clicked on more “best describes….” answers, and even saved enough time in the end to go fix a few questions that I knew had not been answered well. Using every last second of time, and every last iota of willpower & brainpower, I stumbled through to the end.

Next: in which I get my numbers (or do they get me?)

4 Responses to Me vs. The Stinkin’ GREs: In Which I Experience A “Freak-Out”